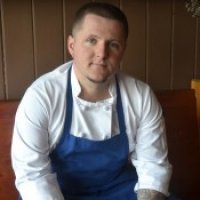 All posts by Brendan McGill

Chef Brendan McGill grew up in Fairbanks, Alaska dip-netting for red and king salmon in the Copper River and enjoying a prolific family garden in the summers. He started his career at fourteen years old washing dishes, bussing tables, and cleaning grease traps. McGill trained at the Art Institute in Seattle, Washington, quickly working his way into many well-known kitchens in the area.

In 2003 McGill started at Il Bistro in Pike Place Market, and went on in 2005 to open the Apartment in Belltown.

“We get the sense that the menu had a distinct personality and style behind it, and that chef Brendan McGill, recently of Il Bistro, enjoys experimenting and rolling with the seasons,” said Seattle P-I food reporter Rebekah Denn of McGill’s food at the Apartment.

McGill returned to Il Bistro as executive chef in 2006 before joining the team at the Harvest Vine in 2007 as chef de partie. Working with Spanish Chef Joseba Jimenez de Jimenez at the Harvest Vine inspired McGill to take his culinary education to Europe. McGill traveled throughout Spain, France, and Italy, cooking in restaurant kitchens and with locals, eager to employ the techniques of Europe’s cuisine with the Northwest’s seasonal bounty. After his time in Europe, McGill did a brief stint as the chef at Cremant, then executive chef of the Via Tribunali group before opening Hitchcock on Bainbridge Island, where he directly sources farm-to-table organic produce and makes products in house at their foundation.

“What he puts on the plate is often spectacular and scrupulously detailed,” said Seattle Times reporter Providence Cicero of the food at Hitchcock.

On any given day at the restaurant, the articulate McGill may emerge from the kitchen with a set of dishes and introduces each course of his popular tasting menu to adventurous diners. He describes ingredients by naming the farmers or fishing vessels and pointing to an artfully drawn map of the Puget Sound to identify sourcing.

“Chef Brendan McGill goes out of his way to shop well, and then he lets those stellar ingredients do the heavy lifting,” said Seattle Magazine’s Food and Dining editor, Allison Austin Scheff.

A year after the restaurant’s opening, the space next door opened up and McGill took the opportunity, launching Hitchcock Deli in November 2011. The deli serves daytime sandwiches, soups, and salads, and offers the charcuterie and farm-direct produce that is served at the restaurant.

Hitchcock, a farm-to-table restaurant on Bainbridge Island, opened in May 2010, and has since been named one of ten best restaurants by critics at the Seattle Times, and Best New Restaurants of 2011 by Seattle Magazine.

The restaurant prints a new menu every day to reflect the seasonal availability of local ingredients brought in by farmers, fishermen, and foragers. Aside from using local and organic produce, chef and owner Brendan McGill and his team prepares elements of his dishes in house.

McGill prints his menu daily and makes the most of the bounty of Bainbridge Island and points not far beyond. He and his crew churn butter, culture cheese, stuff sausages, cure meat and fish, craft pasta and pastries. – Providence Cicero, Seattle Times.

“At first glance, Hitchcock looks like a casual neighborhood bistro. Lace curtains shield the front window; the kitchen is on view in the rear; in between lies a mix of tables, booths and a small bar exceedingly well stocked with wines and spirits,” said Providence Cicero in the Seattle Times.

Old family photos on the wall of the restaurant hint at Hitchcock’s lineage, a deeper connection to the land from which a bulk of their produce grows; the restaurant is named after the Williams-Hitchcock family, among Bainbridge Island’s earliest homesteaders and forebears of McGill’s wife, Heidi. In November 2011, Hitchcock expanded to include a deli, offering house made charcuterie, handcrafted sandwiches, soups, and salads.

Hitchcock Deli opened in November 2011, born from the idea that foods that are fresh from the farm, woods or waters, shouldn’t be reserved only for special events or precious dinners. The deli, which offers handcrafted sandwiches, soups, salads, and French pastries, also carries house-cured and smoked fish and meats, and farm-direct produce, foraged goods, and seafood for purchase. Espresso drinks are made from farm-direct, organic coffee on a handmade Bosco espresso machine.

Share
Gnocchi Make the gnocchi dough – simmer potatoes in water gently for about 45 minutes. Remove from water, peel off skin, and while still warm, push through a ricer or...