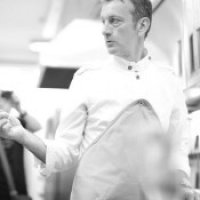 All posts by Andrew Gaskin

In his 35-year-long career Andrew Gaskin (UK) has travelled nearly the entire world, worked with world renowned chefs in famous restaurants and prepared dinners for many a celebrity, including Her Majesty Queen Elizabeth II of England at CHOGM in Malta.

Gaskin has worked for the Starwood hotel chain as the head chef at their hotels in Malta and locations across Africa, China, Thailand and Sardinia, as well as on the exotic Pacific island of Bora Bora. Furthermore, he has worked with the Michelin-star chefs Michel Rostang and Fulvio Pierangelini, and was stagiere in the teams of numerous Michelin-star restaurants ,in Rome (one star), Monte Carlo and Paris (two stars), and Bray (three stars) in UK with the famous Heston Blumenthal.

He describes his own style of cooking as innovative, light and inspired by the Mediterranean, with continued appreciation for the locally available products. In the years he has been inspired by Professor Hubert from his culinary school, who taught him the basics, Marco Pierre White, whose dedication to top quality and perfection he immensely appreciates and Heston Blumenthal, with his creativity and constant re-examination of all the culinary aspects.

Today he works as the Cluster Executive chef of Maistra’s luxury hotels in Rovinj and you can try his dishes at the Chef’s table within the Wine Vault restaurant kitchen of the Monte Mulini Hotel, one of the leading hotels of the world (Gault & Millau 16/20).

“With some minor detours, my life has taken me from a big city such as London to the Adriatic coast and the beautiful little town of Rovinj. I’m looking forward to the challenge of further improvement of the culinary offer across the Maistra luxury division hotels. In that regard, I particularly emphasize the use of only the best local ingredients produced by suppliers that I have picked personally” says Gaskin, adding that each restaurant will have its own story that will rely on the people standing behind it: chefs, farmers, fishermen… All of this will complement the rich international experience he is bringing with him. On question what he aims to accomplish with his cooking, Andy replies briefly: “Happy guests, that’s my primary aim.”

Andrew Gaskin has won two silver medals at the ScotHot World Culinary Grand Prix (Cold and Hot Kitchen), and has a number of trophies and medals from the days he competed in Salon Culinaires across Europe.

Share
Tuna Clean sushi-grade ahi tuna and cut into even slices. Terramin Sauce Whisk and cook egg yolk & vinegar over a bain marie to a pale colour and then add the...

Like 1
Read More
Comment
Share
Soak the foie gras in milk, at 28 degrees temperature  for a couple of hours. Remove and pat dry.  Clean the foie gras, delicately separating the lobes and remove the...