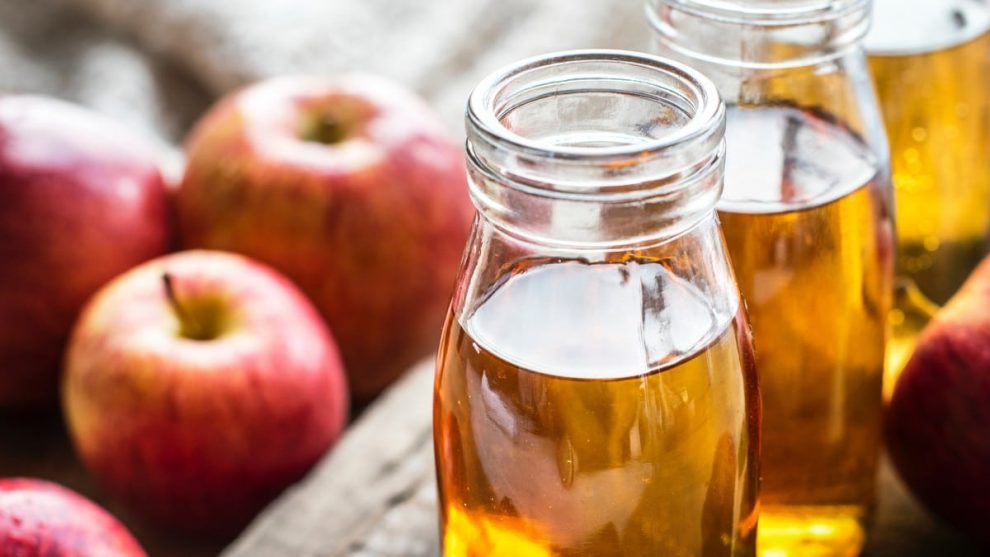 Apple cider vinegar, which is apple juice turned into acetic acid, has a long history as a home remedy, though there is very little scientific proof of its effectiveness. By adding yeast to the freshly squeezed apple juice, the sugar in the fruit turns to alcohol in a process called fermentation. Then, with help from the Acetobacter acetic bacteria, high temperatures, and oxygen, the alcohol turns sour and becomes vinegar.

The bacteria, also called the “Mother” of the vinegar, occur naturally, are found throughout the world, and pose no threat to human life. As they are probiotics, they have come to be seen as the major health benefit of apple cider vinegar, alongside very low fat and protein levels and the low calorie count.

Folk medicine claims that apple cider vinegar in its unpasteurized form (that is containing the “Mother”) can help fight obesity, improve blood sugar and heart health, and treat dandruff. However, there are few studies to back up these claims, and, in fact, because of its high acidity, it can damage teeth and harm the stomach and throat, so use in moderation.

That said, apple cider vinegar is great in salad dressings, added to soups and sauces, and in hot drinks. It can be drunk in small quantities (in combination with water or tea), or mixed with honey and spices and consumed as a tonic.

Its strong flavor adds a certain tanginess to any food making it great for chutneys, marinades, vinaigrettes, and even desserts. Because the flavor is so strong, only use a small amount of apple cider vinegar in your recipes.

Produced by Golden Valley Vinegar, Fairchild’s Organic Apple Cider Vinegar is a pure, organic, raw, and unpasteurized apple cider vinegar, containing the “Mother”, the acetobacter that ferments the alcohol. The apple cider vinegar has a deep golden color and a rich taste, and it contains no concentrates, peels, or core.

It has a rich flavor, which allows using small quantities of vinegar with significant results. As it is undiluted, it has a higher acidity level, but also a deeper color.

This is the best natural apple cider vinegar I’ve ever tasted–really nice, fresh and full, with some apple flavor still there. It’s undiluted and so 25% stronger than the usual ACV. You can tell this is the real deal. I’m so glad I found it!

California-based, the brand uses only apples sourced from the United States, for better quality control of the final product. Also, the vinegar is stored in wooden barrels that boost the natural fermentation process. According to reviewers, Bragg’s apple cider vinegar has a sour smell, but a mild taste compared to other brands.

When it comes to raw Apple Cider Vinegar, Bragg offers the best. It’s great that it’s organic. The flavor is the best I’ve found.

Dynamic Health is a company that provides a range of health supplements and products, available both in liquid and capsule form. The presence of the “Mother” is obvious in Dynamic Health’s apple cider vinegar because of the cloudiness of all the bottles.

This shows that the best part of the apple hasn’t been destroyed. According to reviewers, Dynamic Health’s apple cider vinegar has a mild smell and taste, and a faint citrus aftertaste. Other customers write about using it for cooking, for various digestive issues, and as a skin and hair cleanser.

I like this product. Not sure if to keep it in my kitchen or bathroom as I use it on my cooking, but also as a skin product. Very happy with this.

Made from freshly pressed organic apples grown in the United States, Kevala Organic Raw Apple Cider Vinegar contains the “Mother”, and it is unrefined, unpasteurized, and unfiltered. It balances pH because of its high acidity and allows for better digestion.

The apple cider vinegar is suitable for kitchen use, perfect for bringing flavor to food, but also very effective in cleaning fruit and vegetables.

The flavor is mild, and the taste is not as strong as other apple cider vinegar brands. One customer writes, “Tasty vinegar, like grandma’s homemade vinegar!”

Vitacost is a widely known health product company. It is also a retailer of other brands of vinegar, including Bragg and Dynamic Health.

The apple cider vinegar contains no added sugar, artificial flavors, or colors. Also, it is kosher and suitable for vegetarians. Reviewers mention a highly acidic taste, but great effectiveness.

I will buy this again. When it’s natural, I feel better about the product and it tastes pretty good too. Would give this a thumbs up.

Manufactured by Eden, a small company that specializes in organic health food, Eden Foods Organic Apple Cider Vinegar is just one of their many products obtained through sustainable practices, and by using only organic macrobiotics and locally sourced food.

Unlike most brands, this apple cider vinegar, although unpasteurized, does not contain the “Mother”, which explains its light color and mild taste.

It has a peppery flavor, which you can either love or hate. For some people, the smell and flavor are very pungent, for others, it tastes citrusy and has a smooth aftertaste.

The sipping vinegar can also be used on salads or for cooking as it preserves the natural flavor of apple cider vinegar but enhances it with the help of honey and turmeric.

Fans enjoyed the taste, the variety of flavors, the sweetness of the honey, and that the combination made using apple cider vinegar easier.

The taste is great. It’s better than a shot of apple cider vinegar on its own.

“A smart, tart addition to your pantry” as presented by the manufacturer, Swanson, the apple cider vinegar is unfiltered, unpasteurized, and made with the “Mother”.

The flavor is characterized by the presence of malic acid, which provides a unique taste twist, making the Swanson apple cider vinegar perfect to use for marinades, salad dressings, pickles, and grilled or steamed vegetables.

The “Mother” is not very obvious in the vinegar, so the characteristic flavor is mild.

The organic apple cider vinegar with the “Mother” is combined with turmeric, ginger, cinnamon, and cayenne, to boost multiple health benefits.

Several customers write that, unlike simple apple cider vinegar, which they could not ingest, these shots were easier to drink, either straight from the bottle, as recommended by the manufacturer, or mixed with water. One customer wrote: “So much better than other ACV drinks I’ve tried.”

An apple cider-based tonic, Fire Cider is made with a combination of superfoods infused in vinegar with the “Mother” and sweetened with a touch of honey.

The unique blend of flavors also comes with a lot of health benefits. It has a fiery taste, because of the habanero peppers, horseradish, and black pepper.

The flavor is completed by a note of citrus, coming from lemons and oranges, and a bit of a zing from the turmeric. Not unlike apple cider sipping vinegar or shots, the tonic can be enjoyed as a beverage, mixed with water or tea, or added to salads or other recipes.

Lots of Amazon reviewers wrote that a shot of Fire Cider gives them energy and helps their digestion.

Dill pickles are an excellent addition to sandwiches, burgers, and tuna salad, and the brine makes a perfect marinade for fried chicken. For the pickles, rinse 5 pounds of pickling cucumbers, slice off the blossom end, then, soak them in salted iced water for 4 to 5 hours.

Sterilize some jars, then rinse the cucumbers with fresh water and dry them. Place them inside the jars (either whole or sliced), and add the spices: one garlic clove, a spring of dill, and a mixture of black peppercorns, mustard seed, coriander seed, dill seed, allspice berries, crushed red pepper flakes, and crumpled bay leaves.

Heat 4 cups water, 3 cups white vinegar, 1 cup apple cider vinegar, 1/4 cup salt, and 2 teaspoons sugar. Pour the hot brine into the jars over the cucumbers. Cover the jars with lids, then boil them in a large pot of water for 10-15 minutes, depending on the size of the jars.

IS THERE A PICTURE MISSING? For the apple chutney recipe by Chef Kumud Gandhi at https://www.thecookingacademy.co.uk/, you will need 3 pounds of apples chopped into small pieces.

Put the apples, 1 1/2 cups of dates, 1 pound peeled and chopped onions, 1 pound brown sugar, and DO YOU MEAN A LITER OF VINEGAR? 1 pound apple cider vinegar in a saucepan and bring to the boil. Simmer until the apples and the onions are soft, stirring occasionally. Add 1/2 cup chopped yellow sultanas and 1 tablespoon mustard seed, and continue to stir for about 30 minutes.

The chutney is ready when it is dark and thick. Spoon into jars and seal with a lid. Keep for at least a month before serving.

For the dough, mix 1/2 cup cold water with 2 tablespoons apple cider vinegar and set aside to chill. Whisk together 2 1/2 cups flour, 4 tablespoons sugar, and 1 tablespoon salt, then add 1 cup cold butter cut into pieces and mix until the butter pieces are the size of hazelnuts. Add the water and apple cider vinegar mixture and continue to mix until the dough comes together into a ball. Form the dough into 2 balls, wrap them up in plastic and refrigerate for one hour.

Then, on a lightly floured surface, roll one ball of dough into a round. Place it into a pie tin and refrigerate for 30 minutes. For the filling, combine 2 1/2 lbs apples, 2 tablespoons lemon juice, 1 tablespoon ground cinnamon, 1/8 tablespoon ground nutmeg, 1/4 tablespoon salt, 1 cup mixed brown and granulated sugar, and 4 tablespoons cornstarch. Mix until the apples are fully coated. Fill the pie tin with the apple mixture, then dot the apples with 3 tablespoons of butter cut into small pieces.

Roll the second ball of dough into a round and use it to cover the pie. Fold the edge of the dough under the edge of the bottom pie crust and decorate the top as you wish. Make an egg wash by beating 1 egg with 1 tablespoon milk, and brush the outsides of the pie, then sprinkle with demerara sugar. Refrigerate the pie for 15 minutes, then bake it for 20 minutes in a pre-heated oven (at 425°F), then for another 40 minutes at 375°F.

Corina is a content writer and blogger with a passion for food and traveling. With over 16 years of experience as a copywriter, content writer, and localization specialist, she has a knack for writing about entertainment and a passion for tech. A foodie and travel enthusiast, she likes to explore everything food-related in her travels and discover traditions and authentic products.