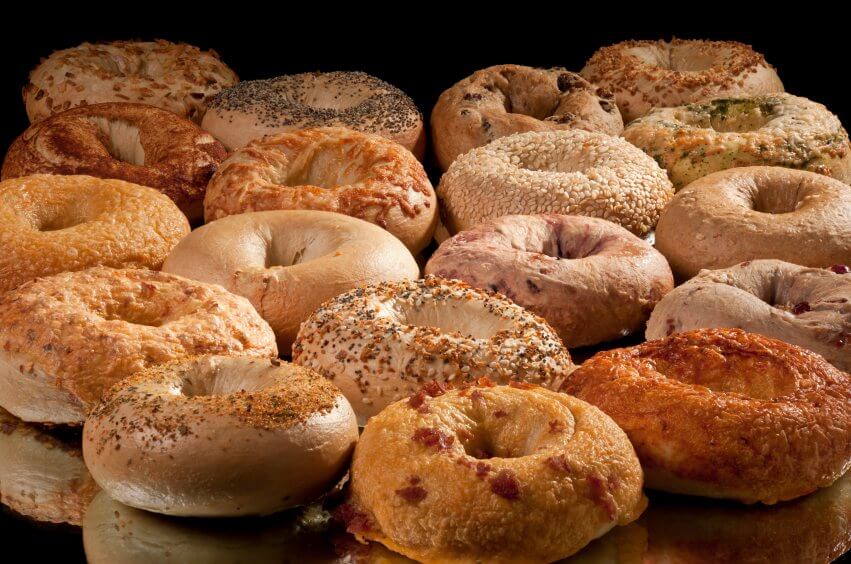 According to the American Bagel Association, 1996 was a break through year for literally everybody involved with the industry of this New York specialty and Jewish delicacy. Earnings grew already from $429 million in 1993 to $1.6 billion in 1995, after bagel producers had started a huge marketing campaign which emphasized the health benefits of bagels and made them interesting for other ethnic groups, too. Bagels are a great source of carbohydrates and potassium and contain very little fat and protein and no cholesterol.

Bagels are said to have originated in Vienna 300-400 years ago, when a Polish Jew created a roll to honour the Polish king Jan Sobieski who helped the Austrians to defeat the Turks; the shape is supposed to symbolize a stirrup. The Jewish community in Vienna began to produce the so-called “Buegels” commercially, and over the years Jewish immigrants developed the bagels Americans and the world know today.

The demand for the crusty, but chewy “roll with the hole” has stretch far beyond Brooklyn and New York, and bagels are now a top seller throughout the United States. The popularity of the bagels has increased so much that Bagel bakeries in the USA are producing an incredible number of variations.

The old New York favorite, a bagel with cream cheese called “Lox” is still popular, but has been modified by thousands of sandwich shops in the USA. There seems to be no end to what chefs come up with, and in many trendy bars peanuts have been replaced as main snacks by double baked bagel chips of any flavor.

“Noah’s New York Bagels” bakes up to 250,000 bagels a week in the Berkeley College Avenue shop in California, and “Ray’s Pizza”; the popular Italian restaurant in New York, is featuring Bagels on its menu with such traditional Italian fillings as salami or Parma ham. “Dunkin’ Donuts” spent millions to introduce bagels to the menus of 1400 outlets and intends to increase the number of bagel selling outlets to 2500 by April 1997.  “Big Apple Bagels” has 150 stores, 89 of which opened in 1996 and another 125 are planned. If this trend is any indication for the markets in Europe and Asia, the bagel will soon be part of the breakfast tables and fast food eateries there. One can only wonder what fusions and creations will evolve out of the bagel on these continents.